🇺🇦 Codeception was born in Kyiv 10 years ago. Today Kyiv is now under rocket attack. You can help to stop this madness. Ukraine needs your support!

Once you get testing suite up and running you are interested in running your tests regularly. If you ensure that tests are running on every code change or at least once a day you can be sure that no regression is introduced. This allows to keep you system stable. But developers are not so passionate about running all tests manually, they also can forget to execute tests before pushing code to production… The solution is simple, test execution should be automated. Instead of running them locally it is better to have dedicated server responsible for running tests for a team. This way we can ensure that everyone’s tests executed, which commit made a regression in codebase, and that we can deploy only once tests pass.

There are many Continuous Integration Servers out there. We will try to list basic steps to setup Codeception tests with them. If your CI system is not mentioned, you can get the idea by analogy. Please also help us to extend this guide by adding instructions for different CIs.

Jenkins is one of the most popular open-source solution on market. It is easy to setup and is easy to customize by applying various plugins.

It is recommended to have the next plugins installed:

At first we need to create build project. Depending on your needs you can set up periodical build or trigger build once the change is pushed to GitHub (you will need GitHub plugin for that).

We need to define build steps. The most simple setup may look like this:

Then we can start the very first job and check the execution progress. If tests fail we will see that in console: 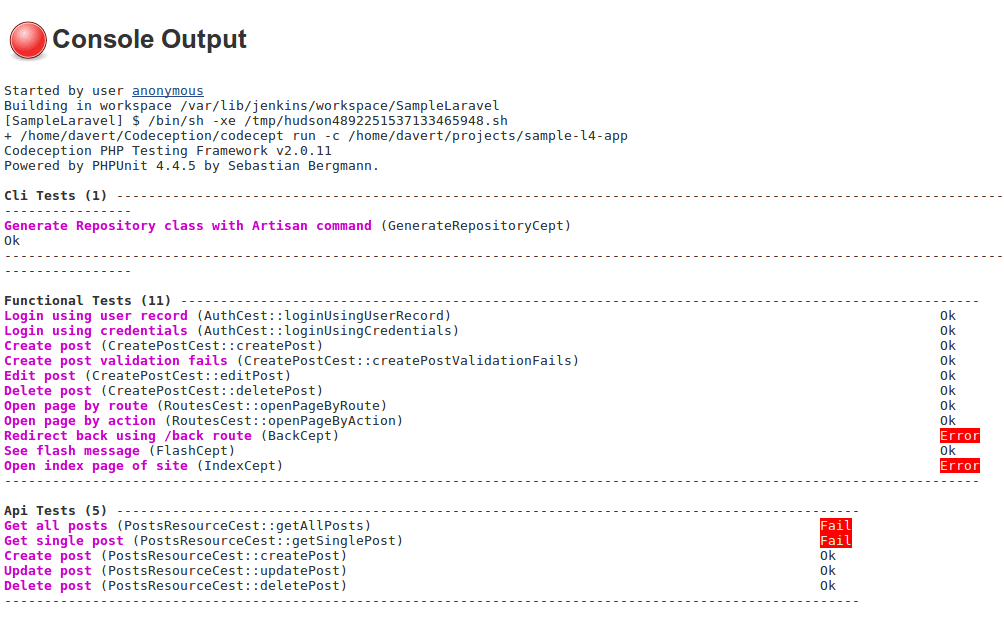 But we don’t want to analyze console output for each failing build. Especially If Jenkins can collect and display the results inside its web UI. Codeception can export its results using JUnit XML format. To generate XML report on each build we will need to append --xml option to Codeception execution command. Codeception will print result.xml file containing information about test status with steps and stack traces for failing tests. 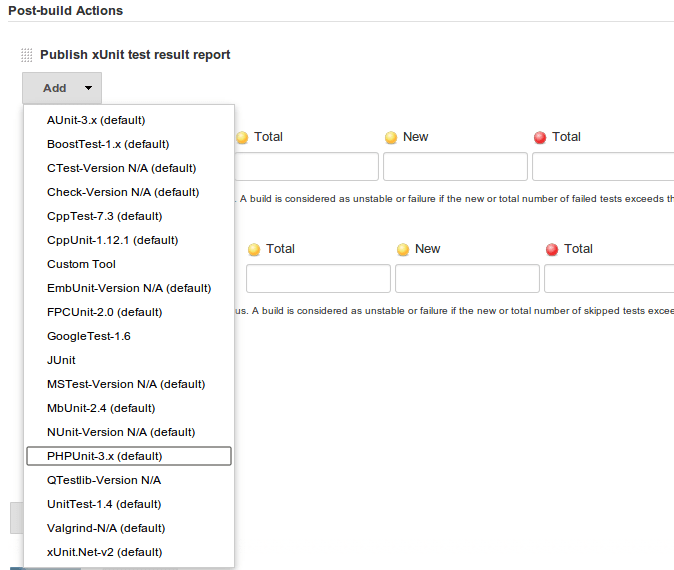 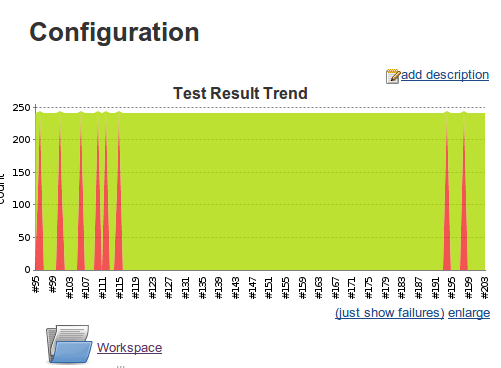 To get more details on steps executed you can generate HTML report and use Jenkins to display them.

Jenkins should locate report.html at tests/_output/. Now Jenkins will display HTML reports for each build. 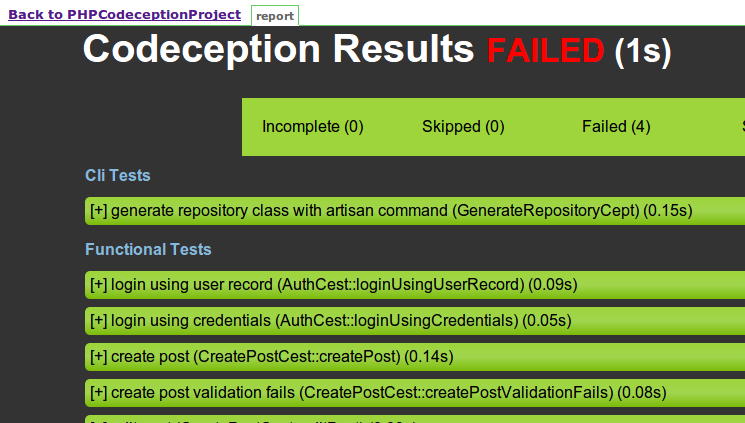 TeamCity is a hosted solution from JetBrains. The setup of it can be a bit tricky as TeamCity uses its own reporter format for parsing test results. PHPUnit since version 5.x has integrated support for this format, so does Codeception. What we need to do is to configure Codeception to use custom reporter. By default there is --report option which provides an alternative output. You can change the reporter class in codeception.yml configuration:

As an alternative you can use 3rd-party TeamCity extension for better reporting. 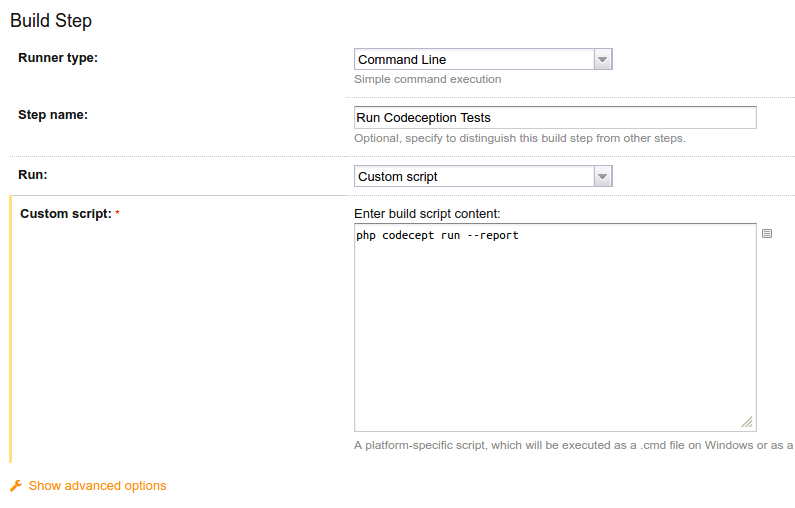 Once you execute your first build you should see detailed report inside TeamCity interface:

Travis CI is popular service CI with good GitHub integration. Codeception is self-tested with Travis CI. There nothing special about configuration. Just add to the bottom line of travis configuration:

More details on configuration can be learned from Codeception’s .travis.yml.

If a file .gitlab-ci.yml exists in the root of the git repository, GitLab will run a pipeline each time you push to the gitlab server. The file configures the docker image that will be called. Below is a sample which loads a php7 docker image, clones your files, installs composer dependencies, runs the built-in php webserver and finally runs codeception: 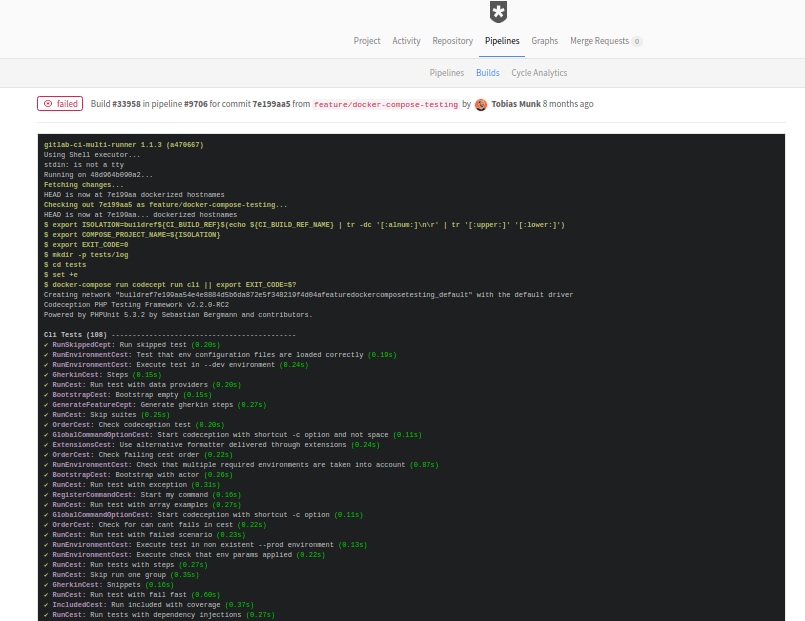 For acceptance testing you can use codeception/codeception docker image as base. See example below:

It is highly recommended to use Continuous Integration system in development. Codeception is easy to install and run in any CI systems. However, each of them has their differences you should take into account. You can use different reporters to provide output in format expected by CI system.

Edit this page on GitHub
Don't know how to write tests on your own? We will build or improve them for you. Request a quote for official enterprise support or trainings
❤️ Support us on OpenCollective!
Follow @Codeception