So how do you check that your applications sends email correctly? It looks like dealing with emails is always a challenge. How would you verify that an email message is formatted and delivered correctly, without actually sending them to your clients? That’s the first question. And the second question is: how can we automate the testing of emails?

For both questions we have an answer. There are two awesome services that have been developed to help developers in dealing with email hell. They are Mailtrap and Mailcatcher. Both services run an SMTP server that does not deliver emails, but stores them locally. They both have a web interface in which you can review all the outgoing emails. The difference between these services are: mailtrap runs as a web service, and mailcatcher is a ruby gem that can be installed locally. 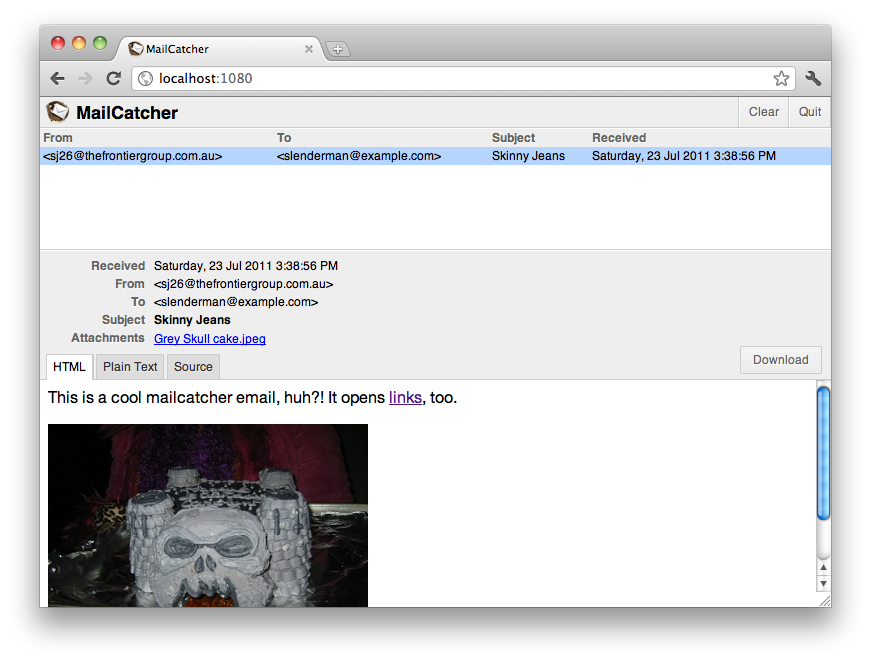 It’s up to you which one to use. Definitely they will simplify your life while developing a web application. Do they have something to offer for testing? Sure! We can access all handled emails via REST API and verify our assertions.

In this post we will marry Mailcatcher with the PHPUnit testing framework. We’ve chosen Mailcatcher so we do not have to rely on a 3rd-party web service and have all the tests run locally. We will write methods for both PHPUnit and Codeception in order to provide different solutions and compare them.

Before we start we need to make sure that Mailcatcher is installed and running. When done you can access it’s web interface on port 1080 and use port 1025 for the fake SMTP server. Configure your web application to use exactly that port when running in test environment.

Mailcatcher has a really simple REST API that is used for email access. Here is a quote from their official site.

What was not mentioned was that you can also clear all emails by sending DELETE request to /messages. The most complete documentation on API is its code. Even if you don’t know Ruby, it is quite easy.

Thus, we will need to send GET and DELETE requests and parse the json response. To send them we will use the Guzzle framework. PHPUnit and Guzzle can be easily installed via Composer:

That’s enough to fetch a list of all delivered emails. All the emails will be cleaned between tests, so each test will be executed in isolation. Let’s implement some assertion methods to check the sender, recipient, subject and body of the email.

The complete code listing is published as gist.

We now have a really simple class for testing emails from your application. Ok, that’s not a unit test. For unit testing you should use a mocking framework to fake the delivery in your PHP code. But you can use this class in acceptance tests (with Selenium) or integration tests. It is much simpler to test emails this way, than to dig into the internals of your email sending library and define mocks. The drawbacks here are the usage of standalone daemon, and reconfiguring your application to use its SMTP server.

It looks like this post is long enough to be published. We will continue email testing next time with Codeception framework. We will develop EmailHelper class for scenario-driven tests of Codeception.